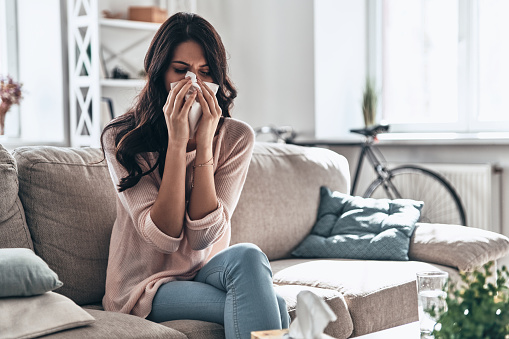 Hayfever : Sex Could Be Used To Stay Hayfever Free This Summer
SHARE
Hayfever is caused by the contact of pollen with the eyes, mouth, nose, and throat. Pollen is a fine powder that comes from plants. Hay fever is an allergic reaction to what is called pollen.
Summer brings itchy eyes, runny noses, and a teasing sneeze for many hayfever sufferers. According to statistics, in 2018, about 24 million people were found to be suffering from hayfever in the US.
But no worries this summer, because scientists think that hayfever sufferers could use sex to guard against hayfever.
Sex could help stay hayfever free this summer. In Iran, scientists discovered a connection of the reproductive system with the nasal system. Their work was published in Medical Hypotheses, a medical journal.
According to their findings, sex constricts blood vessels in the nose and the eyes. As a result, the nose gets unblocked and the eyes stop watering. In connection with this, a neurologist Sina Zarrintan told that it could be a way of treating symptoms, enjoyably.
He said that it could be done at times to lessen the congestion and the sufferer could arrange a schedule of having sex according to the intensity of the symptoms.
It is believed to be more helpful for men because the relief was especially associated with ejaculation. But, at Tabriz Medical University, another scientist told that there were some limitations in using ejaculation for treatment of nasal congestion. These limitations include not being applicable out of home and not having any sex partner.
There is also the issue of whether those suffering from hayfever will want to have sex or not. But it can be a great idea to have sex when suffering from hayfever. Because scientists have found that sex causes constriction in blood vessels in the nose and eyes causing them to unblock and stop watering, respectively.
So those who are suffering from hayfever in summer can alleviate their pain by indulging in sexual intercourse from time to time. This will give pleasure as well as a way of treating hayfever.