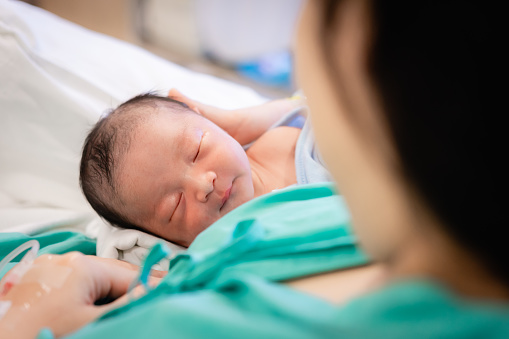 In humans, childbirth is much more complex and painful as compared to that in great apes. It was for a long time assumed that it was due to humans’ larger brains and (mother’s) narrow pelvis.

At the University of Zurich, Switzerland, researchers have shown by using 3D simulations that childbirth was also a complicated procedure in early hominin species that gave birth to relatively small-brained newborns.

75 percent of the maternal deaths during childbirth are caused by:

Other common issues are:

During delivery, the fetus moves through a narrow and convoluted canal. It bends and turns its head during the delivery process. This is a complex process giving birth to different birth complications including extended labor, stillbirth or death of the mother. People believed that these issues were as a result of a conflict between humans’ adjusting to upright walking and our larger brains.

Bipedalism ( using only two legs for walking) developed about 7 million years ago. It dramatically reshaped the pelvis of the hominid into a real birth canal. However, large sized brains didn’t begin to develop until 2 million years ago. It was when Homo’s earliest species emerged. The evolutionary solution to the dilemma brought about by these two conflicting evolutionary forces was to give birth to neurologically immature and helpless newborns with relatively small brains – a condition known as secondary altriciality.

Martin Häusler’s research group from the Institute of Evolutionary Medicine, University of Zurich, and Pierre Frémondière from Air-Marseille University found that Australopithecines had a complicated birth process as compared to great apes.

According to the findings, australopithecines may have practiced of cooperative breeding. The brains developed outside the uterus. This enabled the infants to learn from other members of the group.

The conclusion is also supported by the earliest documented stone tools, which date back to 3.3 million years ago.